The Frumious Bandersnatch CD has been a labor of Love for years and it is now for sale.
It a representation of who we are now as older hopefully wiser people on the planet and
we hope you will enjoy some of our musical thoughts and inspirations.
You can download or buy the CD. Also at the Frumious Bandersnatch Website,
CD Baby, iTunes, Digistation, among other well know musical online music download websites.

Where were you in 1969? This is a picture of us
then in Golden Gate Park Do You Remember? 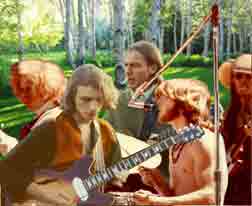 In case you missed this CD in the last century,
it's a "diamond in the ruff" for me thanks to
Stephen Jarivs and Nathaniel Kunkel --

New 5-1-07 from Wolfgangs Vault, a live album from my days playing lead guitar in the Steve Miller Band ,
with songs from the 1976 tour.

The lost tapes of my solo project
were put on a back burner as we toured supporting the "Book Of Dreams"
album while I was in the"Steve Miller Band" in 1978.
"Let The Rain Go By" is now available after 30 years to download!
www.myspace.com/davidwdenny

I spent a lot of time with Tom Size archiving Steve's music.
We found some exciting music you can hear on the
30 year Anniversary release of "Fly Like An Eagle"

The All Night Flight in 1967.
Click on the picture to hear us at Trident Studios
when were 18 years old - just out of high school.

Carlos Reyes and myself can now be heard at
Marie 21 and Flying Myspace page. Two songs from our
CD "Remnant Of Grace" recorded live at Hyde Street Studio C
in front of a small invited audience."Time To Let Go"
and "Down to the Bottom" are in rotation on the site.
Produced by David Denny, recorded and
mixed by Mark Willsher.Also in rotation there
"Free Falling Down" done live as well
with the monologue feel of M21F.

The All Night Flight has been playing gigs about the bay area.

The 40th Anniversary Of The Summer Of Love
was awesome to take part in.